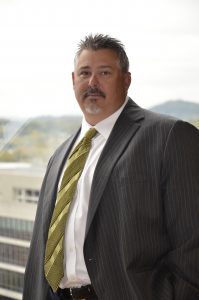 Todd is a graduate of East Tennessee State University in Johnson City, Tennessee and the Nashville School of Law in Nashville, Tennessee.

Todd’s primary focus in law originates from a long family heritage of criminal defense and personal injury trial lawyers.  This heritage began with his grandfather, W.I. Daniel, who was a trial lawyer in rural Grainger County, Tennessee and descended through his uncle, Creed A. Daniel, and his father, the renowned trial attorney, W. Zane Daniel.  Todd also practices with his older brother, Jeffrey Zane Daniel which has allowed the two brothers not only to prosper together but allows them to keep their family heritage and values at the forefront of their practice.

Todd approaches his practice in the same manner as his grandfather did in rural Grainger County by priding himself in the fact that even though this is his economic livelihood, he believes this is still a profession that helps others in need.

A lifelong resident of Knoxville, Todd resides in Knoxville with his wife, Kerri, and their 2 children, Claire and Jackson.