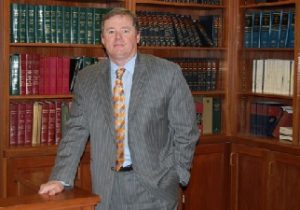 For over 20 years Jeff has represented clients in both Civil and Criminal cases at both the State and Federal level. Jeff obtained his undergraduate degree from East Tennessee State University in Johnson City, Tennessee where he attended school on a baseball scholarship. Upon completion of his undergraduate studies, he returned to his hometown of Knoxville where he obtained his law degree from the University of Tennessee at Knoxville in 1988. Jeff was admitted to the bar in the fall of 1988.

At that time Jeff joined the former law firm of Daniel & Oberman, a firm started by two of the most reputable lawyers East Tennessee has ever produced, his father Zane Daniel and partner Steven Oberman. These two legal giants had tremendous influence on Jeff’s development as a trial attorney over the next 18 years. Focusing his practice on representing those accused of State and Federal Crimes, as well as individuals injured in accidents, Jeff has maintained a steady practice in the East Tennessee area. During the course of his practice he has handled multiple criminal trials ranging from misdemeanor offenses such as DUI, to complex felony murder cases. Jeff has also fought for his clients rights in personal injury and workers compensation cases obtaining much needed compensation for their injuries through both settlement negotiation and trial verdicts. In 2008, Jeff and his brother, Todd Daniel, helped obtain a mediated settlement award of
$2,750,000 for an injured motorcycle victim.

Jeff has always prided himself on maintaining a close relationship with those he represents. As he states:

“ Over the years I have learned that most clients need and deserve more than just legal advice. Whether accused of a crime, or having been injured in an accident, most folks need to be assured that the person handling their case truly cares about their predicament and will do everything possible to obtain the best result for them. Above all, they want an attorney who is honest with them about the strengths and weaknesses of their case, and is accessible to them to discuss it. In recent years, I have begun giving all my clients my personal cell phone number. By doing this I make myself available both day and night to each and every client. From a clients standpoint, that secures the fact that they have access to their lawyer twenty four hours a day, and that he is available to discuss the status of their case, or in the event of an emergency. Above all, I want my clients to leave my office feeling they have not only found an attorney, but also a friend they can call upon for any matter. This was the way my late father practiced law, and he instilled that important value in me and our law firm. That basic foundation was the main reason he was such a success in his practice, and in other areas of life.”

A lifelong resident of Knoxville, Jeff resides in Knoxville with his wife Sharon and their 3 children, Hunter, Blakely, and Hollin.